Just received this message from Party Town in Florence:

The party people at Party Town would like to invite YOU to a special new thing we came up with a few minutes ago. Introducing: FRIDAY NIGHT FLIGHT with Eugene Platinum. That means this Friday, and the following ones too, we would like very much if you and any 21 or over friends you may have would come in and try some beer with us from 6pm-7pm. This week we will be spotlighting the Great Divide Brewery, winners of twelve G.A.B.F. medals, four World Beer Cup awards, and current seventh highest rated brewery worldwide by Beer Advocate. So please come in and see us or Eugene will get bored. Thanks and good day.

It would be silly to deny that there’s a rivalry between Cincinnati and Cleveland.  It crops up a few times a year, mainly when the Reds play the Indians and Bengals play the Browns, but it’s always there.  Given that I’m not originally from around here I’m not into the rivalry all that much.  Heck, I live in Kentucky.  I’m confident, though,  that both Cincinnati and Cleveland beer drinkers can set aside their differences long enough to lift a toast and agree that Great Lakes Brewing Company is one of Ohio’s great resources.  Then, I suppose, they can go back to throwing empty bottles at each other.

Edmund Fizgerald Porter is one of the five beers always available from the 21-year-old brewing operation.  It’s dark, almost opaque, with a creamy head that builds during the pour and hangs around.  There are distinct, but not overpowering (or over-roasted), coffee notes underneath and a perhaps a hint of chocolate.  More of a suggestion of chocolate.  A subliminal suggestion.  OK, I wanted chocolate as I was drinking it; It sent those signals.  The finish is nice in that you get a little lift of hops and you think “OK, here it comes,” but then … nope …. done.  It’s a grace note.  The effect is entirely pleasant.

This is a beer to cozy up with.

We haven’t instituted our rating system yet, but Edmund Fitzgerald Porter is a very, very good beer gets an A.

UPDATE:  Turns out, as Carla reminded me just after posting this this morning, that we have instituted our rating system. We’re both academics to varying degrees (her more than me), so there’s nothing like the good ol’ letter +/- system.

No more free beer at SeaWorld or Busch Gardens: http://tinyurl.com/9cj46u

The latest in Shiner Brewery’s anniversary beer series will be a Doppelbock called Shiner 100: Commemorator: http://tinyurl.com/7j5jvv

Want to be a Hoperative? Just drop an email message to rollcall@hoperatives.com with your name and location to join our ranks and get your roll call number. Later on, your number could win you prizes. Single digit numbers are going fast gone already!

So far I’ve been doing most of the posting because Carla has been very busy doing some of the heavy lifting behind the scenes. You’ll notice over there on the left that there’s a navigation menu broken out into a number of categories. I hope you’ve take a look around, because that’s where you’ll find the fruits of her labor: In a short period of time she’s made a great start on creating a resource that we hope you’ll find useful. Want to know what beers your favorite beer store has on tap in their growler program? We’ll have them here, updated with the most recent information we can get our hands on.

(By the way, do you own an establishment that fits into one of the categories? Let us know who you are and what you’re doing. We want this to be as comprehensive a resource as we can make it. We’re making the rounds as quickly as we can, but you don’t have to wait on us.)

The events list to the right will always show the next five events we know about, but you can get a more comprehensive view from the full Calendar link on the left.  One event that I’m already looking forward to with great anticipation is the 2nd Annual Midwest Winter Beer Festival slated for February 6-7 at the Radisson Cincinnati Riverfront in Covington, KY.  In many ways, last year’s event planted the seeds for this blog.  It’s well-organized, an incredible value and benefits an outstanding non-profit organization:  the Big Joe Duskin Education Foundation.  This event is an absolute can’t-miss.  Start making your plans.

In the upcoming week you can expect to see some reviews, including one in a category we’re calling “Yeah, We Tried It.”  That’s where we’ll review beers you’ve been curious about, but don’t want to be seen buying.  This week’s entry:  Budweiser American Ale.

We’ll also take a look at Mt. Carmel’s Copper Ale and probably a couple of others to to kick us off.  And we’ll be at Rock Bottom Thursday evening for the tapping of the Buffalo Gold Ale.

Look for us.  We’ll be the ones with the beer.

Every once in a while I like to take an idea and beat the hell out of it think about it for a while.  It’s either the fact that I have a bit of a philosophical bent, or that I’m just bent.

Anyway, I have to be honest and say that the motto of this blog makes me a little nervous. It seems like an invitation to mindless snobbery.

Don’t get me wrong.  I don’t have anything against snobbery.  I just don’t like it when it’s mindless.

END_OF_DOCUMENT_TOKEN_TO_BE_REPLACED

Christian Moerlein owner Greg Hardman has purchased the Little Kings brand from a Pennsylvania holding company, according to the Cincinnati Enquirer:

This is a good move at a couple of different levels.  Cincinnati is justifiably proud of its brewing heritage, and it’s good to see a part of that heritage come home (in spirit, if not yet in fact.  Hey, it’s still brewed in Wilkes-Barre).  This is a win for the home team, pure and simple, good news all by itself.  There’s more, though, and it’s probably the most important part of the story.

[…] with the Little Kings purchase, Hardman has doubled the sales volume of his company, and expanded his distribution network, limited until now to the Greater Cincinnati-Northern Kentucky area, to 26 states.

This is, in a word, huge.  I’m a big fan of the Moerlein beers and I think they’ll do well outside the region.  They certainly deserve to.

At the moment this is a good, clean double, but it could stretch into an inside-the-park home run if Hardman’s strategy pays off:

The Little Kings acquisition gives the company a platform of brands to establish national distribution and eventually build sales volume to where Hardman hopes to re-establish a brewery in Over-the-Rhine, once home to the city’s brewing heritage.

Congratulations to Greg Hardman and all the folks at Christian Moerlein.

Welcome to Hoperatives, a place for believers in better beer.

This blog is centered on Cincinnati, Ohio, one of the world’s great beer towns. We’ll focus on the people, places, and events that make it great.  We’ll also look at happenings in the region, which we’re defining as anything within a five-hour driving range.  That takes us from the shores of Lake Erie to the north to the Tennessee River to the south, from somewhere in the middle of Illinois to the west, to somewhere in West Virginia to the east.

Hey, it’s about beer, not geography.

Finally, because the proprietors of this establishment like to take their love of beer on the road, we’ll venture beyond regional and national borders and report back on what we find.

There’s a reason a good beer bar is noisy.  It’s because people are talking.  That’s what this place is about.  It’s a place for believers in better beer to congregate and have a conversation.

It’s going to be fun.

The (formerly?) local brewery Christian Moerlein celebrates New Year’s Eve in mega style with the construction of a 20 foot long, 12 foot high ice bar made out of about 15,000 pounds of ice. The taps were frozen inside the ice sculpture. 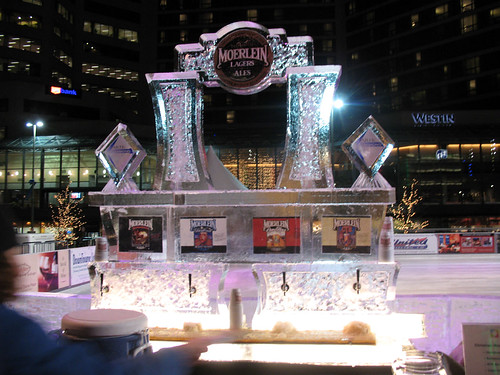 Here’s the press release from 3CDC:

WHAT: Construction of the Christian Moerlein Ice Bar on the U.S. Bank Ice Rink on Fountain Square.

WHEN: Crews arrive around on the Square around 3:30pm today and start work around 4:30 pm. Workers will unload an additional 10-12 blocks of ice to complete the Ice Bar, made up of a total 15,000 pounds of ice.

WHERE: Northeast corner of the U.S. Bank Ice Rink

ICE BAR FEATURES: Faucets are frozen inside the bar so beer can be tapped from inside the ice sculptured bar, which is about 20 feet long, 12 feet deep and 10 feet high. In addition to beer, martini drinks will be sold.

The Christian Moerlein Ice Bar is part of the Kroger 2009 Fountain Square New Year’s Eve Blast. Festivities begin at 8pm with free ice skating and skate rental, courtesy of Strauss & Troy, LLP, DJ Pillo, soft drinks and snacks and a countdown to midnight capped off by a fireworks show by Rozzi’s Famous Fireworks.

Special thanks to our title sponsor Kroger and presenting sponsors Strauss & Troy and Christian Moerlein as well as U.S. Bank, sponsor of the 2008-2009 Fountain Square Ice Rink. For daily skating rink hours, visit http://www.myfountainsquare.com. The rink is open New Year’s Day from 2pm to 10pm.

Like what we are doing here at Hoperatives? Want to help support our work? Just click below to give a tip.

Cincinnati State Technical and Community College is now offering a one-year certificate in Brewing Sales and Marketing and a two-year degree in Brewing Science.

Just want to learn more about craft beer? Sign up for their Introduction to Craft Beer class which is offered each fall.